Before the golden age of JRPGs on the early PlayStation consoles, there was a series called Ogre Battle. Its first American installment, The March of the Black Queen launched on the SNES in 1995. It was not expected to be well received by the American market, so it was limited to a release of only 25,000 copies. It received mixed reviews from critics and never had a second run, but it became a cult classic among fans of tactic style RPGs on the SNES. Sequels were released to a more avid audience in Japan, but the series did not return to America.

In 1999, publisher Atlus USA decided it was time for the series to have another shot with an American audience. In this time, RPGs were becoming more commonplace due to smash hits on the SNES like Chrono Trigger, Final Fantasy 6 (originally released as Final Fantasy 3 in America), Earthbound, and even Mario’s own RPG, Super Mario RPG. While America was getting acquainted with RPGs, they were not expecting something on the level of Ogre Battle 64. 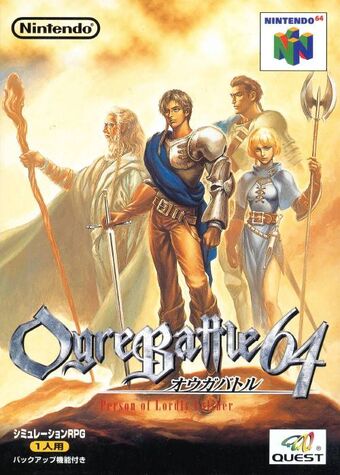 The game was mechanically similar to The March of the Black Queen and its Japanese sequels but more refined with additional mechanics and a slightly more streamlined approach. This game continued the Ogre Battle storyline, but could hold up as a standalone game. When you first plug the cartridge into the N64 you are greeted with an in depth tutorial that takes hours to complete. While it is lengthy, you need every second of the tutorial to understand how to play the game. Looking back, it is amazing that they managed to compact all that information into such a relatively short time frame.

After you finally complete the lengthy tutorial, the game finally begins. It starts off telling the backstory of the world for almost the same amount of time as the tutorial. While this may bore consumers who aren’t invested in a story, it tells one of the most rich tales on the N64 if not all of gaming history. The story is grand and discusses many matters which are just starting to appear in modern games such as racial and political divide, the traumas of war, and the camaraderie formed through battle. I will not share any more then this, as it is best to experience with blind eyes.

The gameplay itself is deep and unique to this day. Hardcore tactics fans may be disappointed due to the lack of actual combat in the game, but I feel it provides one of the most interesting takes on the RPG/strategy genre. Instead of individually controlling the troops on the battlefield, you take the role of a general. You prepare your troops for battle and set up formations, but the troops themself fight the battle which you have little to no say in. Aside from the interesting combat experience, the main portion of the game is spent on politics between towns you have conquered and trying to make sure they do not rebel against you. This can take hundreds of hours to successfully beat, making it a strong contender for the longest N64 game ever.

At release, the game was a critical hit and received good sales in America. It did not break records due to the conservative production and limited appeal, but far surpassed the expectations set for it. Nowadays, the game has a loyal and dedicated following, but has somewhat been lost to time. While many people love this game, it is not the gaming phenomenon that it should be, and does not receive enough credit for its revolutionary ideas which have inspired some of the most legendary games of the recent console generations, such as the Persona series and even some aspects of Fire Emblem: Three Houses. As the N64 is experiencing a surge in popularity, I hope that this game can eventually find its place in the hearts of gamers who may have missed it the first time around.